The Cheese Files vol. I 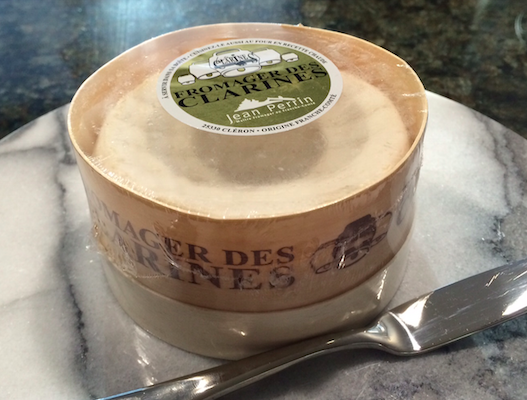 For years I have been a tepid supporter of the state of CT. To me it’s summed up in its choice for state bird: the American Robin. How… unoriginal*.

YET! Since moving to the Connecticut shoreline my enthusiasm for my state of residence has skyrocketed! It’s like someone took a salt and pepper shaker of awesome and seasoned the shoreline with cultural and culinary gems.

Jen and I found one such gem a few weeks ago:

It is the cheese shop to end all cheese shops: Perfectly cute and full of far more than just cheese.

They have about 240 kinds of cheese, all sorts of coffees and spices, and adorable kitchen tools and organizational bits that make home dining even more of a pleasure.

Each cheese will be rated on its taste, its price, and its independence (edibility without cracker, honey, or bread)

This French cheese comes as a full wheel packaged in an adorable little wooden box slightly bigger than a hockey puck. This cow’s milk cheese is soft and smooth. We served it’s creamy goodness warm with honey, almonds, and cranberries atop green apple and crackers – though it appears that the experts recommend eating it at room temperature with a spoon. It’s mild and does not need to be accompanied by cracker, honey, or other supporting character.

Overall this cheese was exceptional, although a bit pricy coming it at $16 for the wheel.
Taste 3/4
Price $$$
Independence: High

Next up? I’m not sure just yet. I may review the cheeses we’ve already tried or try another soft mild cheese. Either way, I can assure you that we are starting on the mild side before venturing into the realm of smelly cheeses. The potent cheeses occasionally require mental preparation.

*
more than just boring the American Robin is also the state bird for Michigan and Wisconsin. This seems such an odd circumstance considering that “state anything” should really be meant to define some uniqueness and originality. I’ll save this rant for another post.

One thought on “The Cheese Files vol. I”