Dismantling of a Box Spring

Yesterday as I prepared the House of Rock for a new tenant, I found myself with a box spring that needed to be discarded. “No sweat,” I thought, my ruminations saturated in overconfidence, “with tin-snips, a knife, and hammer I bet I can knock this out in 20 minutes!”

It took two hours – and I was INDUSTRIOUS.

The concept is simple enough: Cut off the fabric backing and the mattress pad, remove the springs or spring assembly from the frame, dismantle the frame, and roll the spring assemblies to fit inside one or two of those big black garbage bags.

Conceptually, that’s exactly what I did. But each step was a labor of Hercules. Wrestle and slay the Nemean lion? No sweat. Try rolling a matrix of metal into a cannoli.

Anyone who dismantles a box spring deserves an Olympic medal.

Off the beaten path

Prior to moving to Clinton, CT, I had never lived outside of a city. As such, I’ve never had experiences with nature creep – that is, the slow but inevitable incoming tide of nature as it slithers, wriggles, and scrabbles into, around, and through a home. Prior to 2013, I only knew a pest as a mouse or a fly. Oh how unexposed I was! Since purchasing this home, every year we’ve fought off a different invader.

Drain flies live in drains! Imagine that! Thankfully we caught the issue before it became a problem. We bought BIO DRAIN by Invade and it worked pretty well. It also smelled pleasantly citrusy and was easy to use.

If weird little cocoons show up on your carpet, be forewarned your carpet is being slowly consumed by this bug that matures to a moth. Thankfully, the treatment is easy: Vacuum like you’ve never vacuumed before! Also? Ceder and lemongrass spray around the perimeter of a room. It took us a solid 30 days to rid ourselves of these pesky bust mostly benign bugs.

What the heck is artillery fungus? It’s a spore that lives in mulch and launches tiny black modules all over your property. So far, this is the most annoying pest I’ve encountered. These spores can fire 20 feet in the air! AND, you can’t even pressure wash the spores off of siding you have to individually scrape off each one AND THEN you have to go around with a toothbrush and scrub off the residue.

How does one prevent artillery fungus from attacking your home or car? You can’t. It just happens with Mulch. 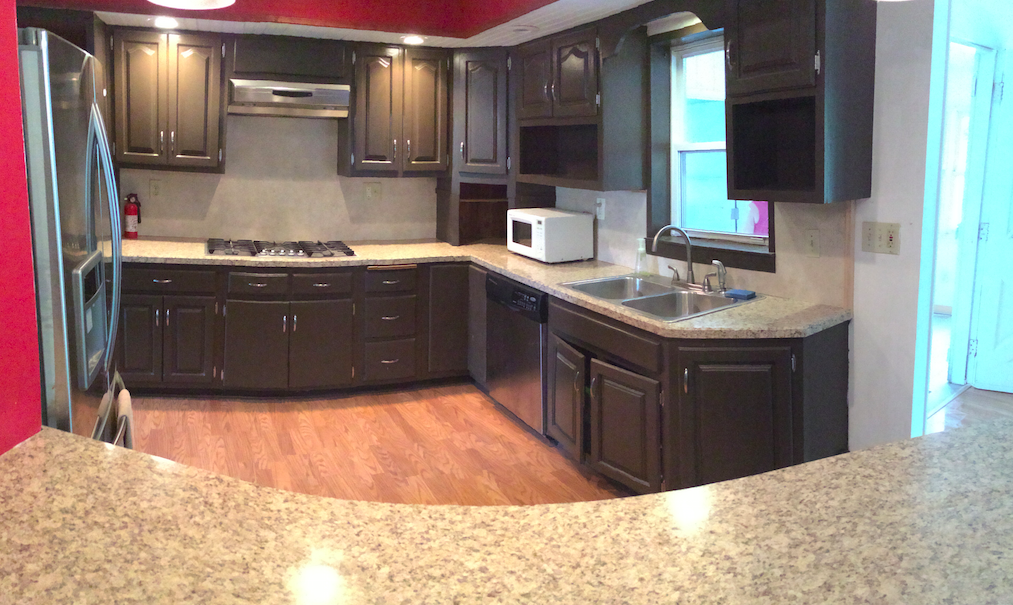 The Kitchen is complete.

It has come so far from its point of origin when the drop ceilings and poor fluorescent lighting were marginally worse than the gross tile counters and the aging appliances. Eventually, everything was replaced. The first wave of changes came in 2009 with the new ceiling, lighting, and appliances. This weekend we finally completed the second wave of changes with the counters and cabinets. I am so relieved that it’s done. 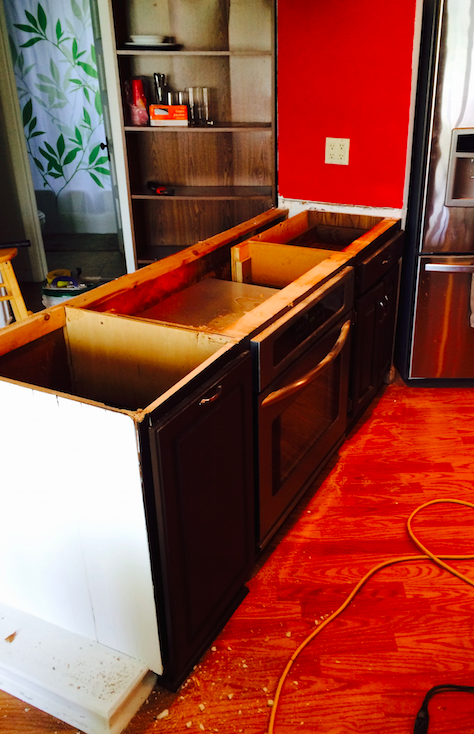 Today we look at the counter work at the House of Rock!

First, removal of the existing counters!

The peninsula came off no problem. Not so with the other counters. I took this second picture during a frustrated break as I tried to figure out how I could possible get the counters off. Finally, I made the easy decision: get help.

I hired a contractor to get the last counters off and help professionally install their replacements. The work is still underway, but this next picture shows where we are at the moment. Looking good! We still have to cut the holes for the range and the sink and get the last of the backsplash up and secured. This is heaps better than our starting point for sure.