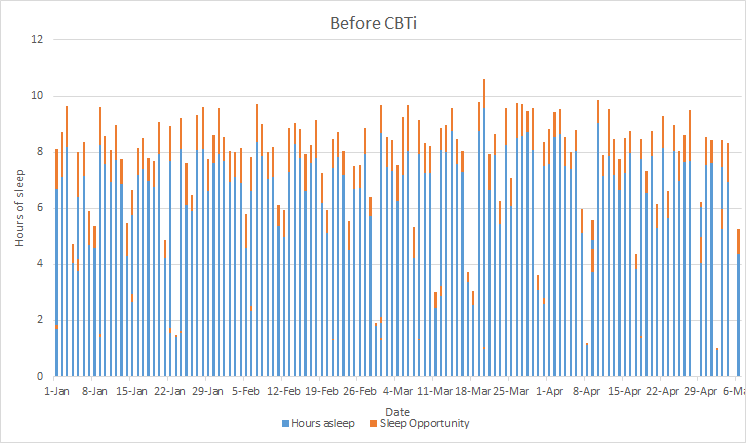 On May 5th, I had my first sleep consultation with the Cognitive Behavioral Therapy for Insomnia (CBTi) experts at Yale. Over the following 8 weeks or so, I met with them weekly to go over various strategies to improve my sleep. It’s now about 5 months later so let’s look at the data.

DISCLAIMER: I’m using fitbit data which is generally frowned upon by experts for being far too unscientific. To that I say Whatever. I think it still tells a story.

Let’s take a look at the charts for the before and after:

What have I noticed? Perhaps even more significant than the general increase in my average sleep is the fact that my nights with horrific sleep are virtually gone. Those are the nights where I wake up in the middle of the night and can’t get back to sleep. You can see them as the big white gaps in my first set of data. I used to be nervous when it was time to go to bed. I would anxiously wonder if it was going to be a terrible night again; but that’s all gone. These days I go to bed every night and fall asleep within 10 minutes or so. Most nights I do wake up, but I calmly go back to sleep without an issue and then I wake up with my alarm or just prior. I have found that I’ve been waking up before my alarm more often than I’d like, but I’m not really worried about that sort of thing.

I still have bad night’s sleep once in awhile, though now it’s usually due to an extrinsic event. My work phone rings or I have a looming deadline or presentation that is making me nervous. But these can be easily explained and dealt with.

I’m really happy I finally pulled the trigger and sought help with my sleeping. It’s made a huge difference.