NES Review #3: Solstice: The Quest for the Staff of Demnos

[Editors note: Meghan is unable to participate in this post due to ongoing email difficulties. Guess my opinion is the only one that counts this week.]

Title: Solstice: The Quest for the Staff of Demnos
Publisher: CSG Imagesoft
Year: 1990

We’ve been pretty lucky so far. We’ve covered Mega Man, and Dragon Spirit – both venerable, well-respected entries into the annals of the NES. However, today we must diverge into something a little less savory – Solstice is not up to the levels of the games we’ve covered so far. In fact, if I had to come up with a single word to describe Solstice, it would be “infuriating”.

(the above was Marin’s contribution to the article. The perspective of the younger generation (i.e. 1 year old) is always appreciated.)

Solstice delivers 3 entirely different levels of pain. First, there is the storyline and the main character; second, the insane play control, and third, the ridiculously difficult world that the game exists in.

The storyline is deceptively basic. You are a wizard, named Shadax, trying to rescue a princess (Elanor) from some sort of bad dude (Morbius). The princess is about the best part of this character lineup, because her motivations are simple and she just needs to be rescued. Morbius’s name is suspiciously close to a Mobius strip, and, just as a Mobius strip, Morbius is oddly one-sided. I have never gotten to the end of the game, or even close, so perhaps Morbius develops into a complex character with conflicting motivations and a soft side – but somehow, I doubt it. He’s another possessive fellow. Interesting that so far, the bad guys in our NES reviews share the need to assert ownership over someone. Are we sensing a trend?
But the most confusing and enduring question in the game is “What Does Shadax Actually Look Like?”

The problem is, we have several different graphical interpretations of our hero. The first in the title screen of the game: Here, Shadax is swathed in his classic blue robe, and sports a grey mustache, blue spot eyes, and over-sized inflated hands, the likes of which I have never seen before.Okay, so he’s a little weird, but a fairly typical wizard.

Then we see this screenshot in the intro sequence: What happened? He has real eyes (a good improvement) that are still blue, and his outfit is still blue (although it looks a little sharper; maybe he was meeting Princess Elanor for more than just some polite conversation?). But his mustache is now light brown and a lot sharper and more stylish. Shadax apparently started the game as a fairly young wizard, and then aged to grey in the maze. I don’t blame him.

But then, there’s this: 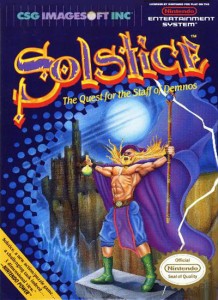 What the hell? Shadax is blonde, muscle-bound, and PISSED. I have trouble reconciling this fellow with the dude from the opener, although it does lend more credence to the idea that Elanor and Shadax have something going on behind the scenes.

In any case, let’s move on to the play control. Frankly, it’s terrible. The game tries to be three-dimensional, but the three dimensions don’t actually line up with the up-down-left-right of the control stick. This leads to hours of frustration, as you try to move up, but instead move sort of up and to the right without meaning to, directly on to the spikes or the monsters. I find that this detracts so severely from the game-play that I would call it an inhibitor to fun. Even if you think you’ve mastered it, there are specific rooms in the dungeon that are configured so bizarrely that you can end up burning through all your hard-kept lives in a matter of seconds due to the play control.

Finally, there is the game itself. There are what seems like thousands of rooms to get through, many of which that can’t be accessed until some other action has been accomplished, by which time you’ve lost your way entirely and you can’t get back to the original spot anyways, since you’ve died, again. I don’t care how effective Demnos’s staff is, even if they work long hours and are more efficient than other corporate staff. They can’t be worth this. In fact, just writing about it is a frustrating experience, so I think I’ll stop.

Solstice is lame. Not recommended, unless you are feverish and enjoy being embedded in frustration.

2 thoughts on “NES Review #3: Solstice: The Quest for the Staff of Demnos”