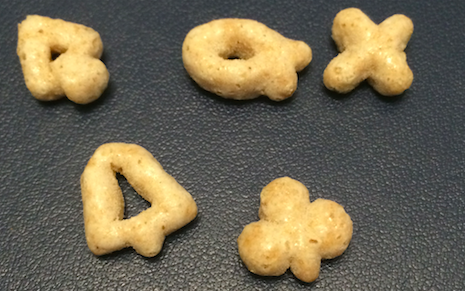 Jen and I coupon as much as we can. The efforts of couponing often fill our pantry with unique foody pleasures that we would never otherwise pause to appreciate. So here I am, writing a post about Lucky Charms.

Quick now, let’s test our memories. How many of the Lucky Charm marshmallows can you name?

What I didn’t know until researching this post was that each marshmallow (per generalmills these are actually called “marbits”) is suppose to signify a magical power of Lucky the Leprechaun. In a 2008 press release General mills linked these magical powers to the marshmallows:

This is a serious skill set.
If Lucky the Leprechaun existed in the Marvel universe he would be extremely powerful. Quite frankly he’d make an excellent super-villain.

Anyway, we aren’t here to talk about the marbits. We are here to talk a bit about the OTHER shapes in the cereal bowl. The supporting cast. The help. The rhythm guitarist. The html style sheets. The red shirted star trek away team members. There’s really not much research on the internet about the non-marbits; except for one conspiracist (or perhaps just an enlightened cereal philosopher) who sees the oaty pieces as part of a Christian agenda (fish (or alpha), Christmas tree, crosses, church bells, references to the trinity…). This theory actually fits pretty well except for the fact that the mashmallowy sugary occult more effectively hold our attention.

Adding to the complexity it turns out that the tree shape isn’t suppose to be a tree.

“What?!?” you exclaim in complete disbelief

Arrowheads? How odd. What a strange collection of cereal pieces. I can’t think of any set that would properly include all these items.