On Monday, Sarah and I visited Seattle. I’d never been to the city before and I must say I was pretty impressed. We happened to go on a sunny afternoon, so we lucked out in that regard. On the drive up we stopped by Mt. St. Helens, but sadly it was too cloudy and the road was too snowed in for us to get a close look at the mountain. Once in the city, our first destination was the Experience Music Project which is an awesome interactive music museum at the base of the space needle. It’s adjacent to a sci-fi museum, so it’s safe to say that Sarah and I had a pretty awesome time at both. 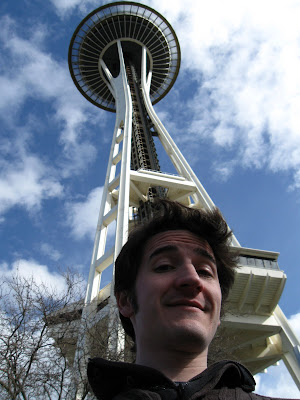 Mike D. at the Space Needle with excessive hair action.

One added bonus of going to Seattle was that we got to hang out MikeDiDonato.com readers Patrick and UUIG (hereafter referred to as ‘Gina’). They are Seattle residents and happened to have an afternoon free from work. 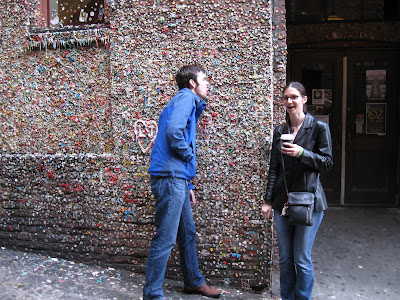 Patrick and Gina at the ‘wall of gum’

We strolled up Post Alley and saw the throwing of the fish and enjoyed walking through the shops. We stopped for some coffee and baked goods and rocked the day to pieces.

I really liked Seattle. It had a modern feel without the feeling of oppressive overpopulation like you see in New York. It was right on the coast which made for beautiful views, and the people had just the right amount of alternative feel to them so that you felt appreciated, but not surrounded by waves of hipsters.

It was a pretty awesome day. Special thanks to Sarah for the photos above and to Patrick and Gina for taking some time out of their days to say hi.